It is unavoidable today to think about how the users would experience the virtual world without adding the best locomotion design. Learn more about locomotion and how Minsar helps you navigate into the virtual environment to perform your experiences. 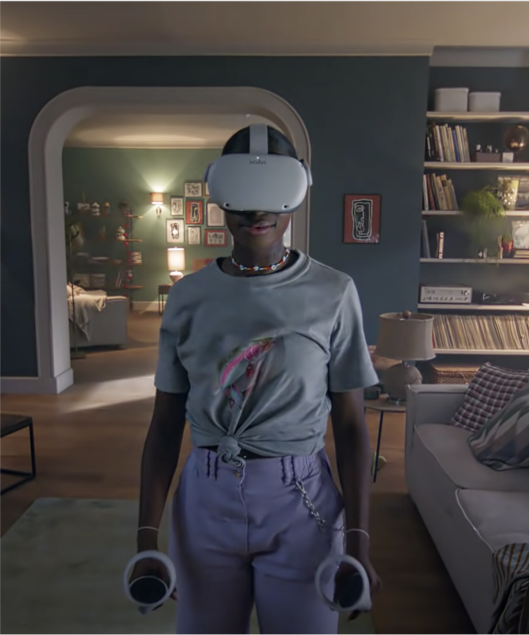 The magical effect of virtual reality comes from its ability to exalt creativity in a whole new 3D world to explore from your own living room. More than that, supporting video games in VR and open-world exploration applications during the last decades was the springboard to a new bunch of studies about designing extraordinary virtual user experiences with locomotion and navigation.

Let’s say it differently: it is unavoidable today to think about how the users would experience the virtual world without adding the best locomotion design.

So how do we provide to you, dear creators, the key to help you navigate into the virtual environment to perform your experiences?

The user-body as a locomotion technique was driven by one thing: enhancing the feeling of immersion with the translation of the body movement to the VR motion. The user manages the speed and the direction with its own body depending on its own will.

"Walking-in-place (WIP) is a technique of navigating a virtual space using leg motions while remaining stationary" (Templeman and al, 1999 quoted by Lee, Ahn, and Hwang, 2018). Not to be confused with Treadmill's solution, this is one of the oldest immersive locomotion techniques created in order to improve the experience of the users while exploring virtual environments.

On the other hand, the External Peripheral centered locomotion techniques could be considered as an artificial way to move in VR, the efficiency and effectiveness of the locomotion are more important than improving the experience itself, you want to go far, sometimes on a long-distance experience. All that matters is to support the user with an external device to keep the focus on the environment. Hence, the user-body is followed with an accessory to guide natural movement (moving sidewalk, for instance).

This technique means to point a zone from the virtual area around where you will be teleported. The "jump" seen between the two positions translates to teleportation. This technique is usually great for long-distance locomotion, and lots of documentation from Oculus to Unity recommend this technique for VR applications.

What is really important?

Lots of criteria were evaluated by scientific literature to compare between locomotion techniques, here are few examples of them to understand the next table:

Interaction with the Virtual Environment

On 26 papers from 2012 to 2019, we discover that there is no real perfect technique, according to what you really want for your experience. All of them, from physical locomotion to artificial locomotion have their own cons and pros.

On one hand, using any kind of user-body locomotion techniques could be quite tiresome for users when translating long-distance or long-time movements to explore the area. More than that, a 2019 article from Boletsis and Cedergren shows that the participants of the study feared collision with physical objects and developed motion-sickness while using the walking-in-place technique. Otherwise, they maintain that the experience feels more fun and immersive in the current virtual experience than artificial techniques.

On the other hand, the artificial locomotion feels disconnected from the immersion we saw earlier for greater control of the movement as in video games. For example, teleport according to Boletsis and Cedergren's study has greater usability and efficiency to complete tasks asking for fast navigation but shows less attractiveness than other techniques. Plus the control precision could be difficult, even if some people consider that the locomotion precision is only to get the hang of it (Keil & al, 2021). The users do not report motion sickness (or fewer) during their activity even if the "jumpy" translation from a zone to another causes eye strain.

Basically, only a few of them can combine several conditions from all the criteria mentioned above: Real walk technique, walking-in-place where users suffer from motion sickness, or trouble to travel in a large virtual environment, Teleporting (Hand gesture or HMD Controllers), and the Joystick where the precision of the direction could be challenging at the beginning.

And in Minsar Studio?

In Minsar Studio, the navigation is fundamental to the creation as it allows you to conceive in 3D. Precision, Comfort, and Easiness are key in our movement

Teleport in Minsar Studio is a feature you could find in several apps you can use to create (As Tilt Brush) that enable you to start with Minsar Studio without stress. You could modulate your movement from short to long-distance quickly.

When you want to move around or change the point of view, you could simply turn around, unless you are in a configuration that can't allow that. In that case, you could use our feature to turn around to 45°. You could also draw a better view of your amazing experience.

For creation high up that you can't improve from your place, you could use the "drag yourself" feature that allows you to bring you closer to your scene and make them pixel-perfect! Or, when you need a new orientation, hold and drag both grips to zoom in or out and rotate the scene!

Do you want to learn more? Please check our Learn Page or our tutorial about all the basic manipulations in Minsar Studio VR

Sometimes, even the best locomotion is not enough to provide the best experience so far. At Minsar, we truly do our best to propose something easy, precise, and efficient to make your creativity at the center of your experience.

Bond, D. & Nyblom, M. (2019). Evaluation of four different virtual locomotion techniques in an interactive environment. Bachelor of Science in Digital Game Development. [Read the reference](https://www.diva-portal.org/smash/get/diva2:1334294/FULLTEXT02#:~:text=One of the most common,sickness [5%2C 4].).

Sign up for our newsletter to receive quarterly updates.

Thank you! Your submission has been received!
Oops! Something went wrong while submitting the form.

Digital Art is taking up space with augmented reality

Thank you! Your submission has been received!
Oops! Something went wrong while submitting the form.

Unleash your creativity.
Try it now.

Start creating for free, and take as long as you need.
When you’re ready, just add a plan and share your experiences with the world.
Download the app